On the eve of a likely impeachment acquittal in the Senate, President Trump refuses to shake House Speaker Nancy Pelosi’s hand at the start of his State of the Union speech. She responds by ripping it up. But her act had other ramifications: It stole the limelight from the White House.

The night began with President Trump refusing the obligatory handshake with the Speaker of the House. It was, after all, her House. Literally, he was an invited guest. Had Nancy Pelosi let that slight of hand pass, the next day’s headlines might have mentioned the ire between the two, but the focus would have been on what the President said about the economy and other positive talking points.

When she ripped up the speech, she framed the next day’s news. The video of her went viral, especially when Republicans and Trump supporters took the bait and went to social media with harsh posts and tweets. Here’s a representative one from former Arkansas Gov. Mike Huckabee, who alluded to a crude remark:

The White House was more measured in its response: 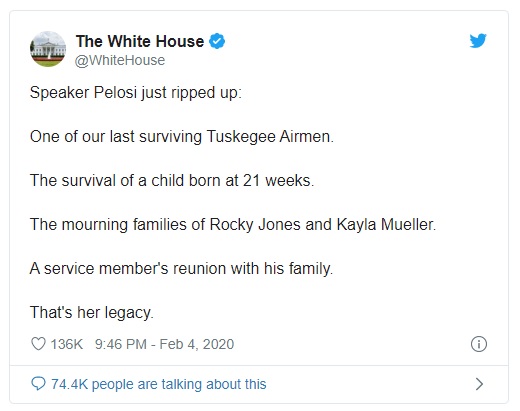 Pelosi told reporters it was “the courteous thing to do, given the alternative.” She did explain what the alternative might have been. Later she said the Trump speech was “a manifesto of mistruths.”

CNN called the act “unprecedented behavior for a speaker, aggressively rude and unapologetically meant to rile up her base. It was divisive, but effective.”

She stole Trump’s show and a page out of his news framing playbook.

The act itself may or may not have been intentional, but it certainly qualified as manipulation, striking Trump’s weakness for ratings and limelight.

Pelosi did the same thing in 2019 when she condescendingly applauded Trump, rolled her eyes and otherwise undermined his message.